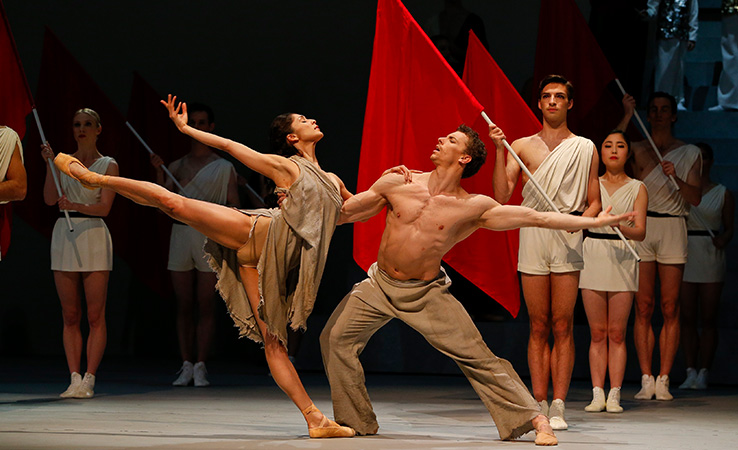 Freedom, love, one’s own principals – whatever their cause, rebels on screen have always won our hearts with their courage, passion and strong character. With one of the greatest of them all – Spartacus leaping into cinemas next Wednesday 8th of May, we take a closer look at some of the most compelling rebels in event cinema.

Bought as a slave, trained as a gladiator and forced to kill his own friend in the arena, Spartacus incites his fellow captives to break free as he leads their rebellion against Rome. The Australian Ballet’s recreation of the classic story through dance is not only one of the most powerful ballets you’ll ever see, but also a moving and tragic love story between Spartacus and his wife Flavia – who’s forced to live as a slave in consul Crassus’ villa.

Jamie New is a modern kind of rebel – he’s only 16, and kids at school tease him because of his sexuality. All the boy wants is to be a drag queen – wear fabulous dresses and high heels, and perform. When rumours spread around the school that Jamie wants to come to prom wearing a dress, his teacher explicitly forbids it. But the teenager is not so easily discouraged – he follows his dreams of performing in drag, and stands up for himself by coming to the school party in a beautiful frock. With a little help from his friends, he finally gets to be himself and celebrate in style.

You must be thinking: how's Queen Victoria a rebel? But in her 81 years of life, many people tried to control the monarch: her mother, her government, her husband, her kids – and ultimately, the Queen was just too stubborn to give up once her mind was made up. Northern Ballet’s new production perfectly portrays her character – you’ll see a lot of sharp movement, with Victoria often throwing her arms straight up in the air – a symbol of not just her royal status, but most of all her strength of character.

Don Quixote is a man who rebels against conventions – refusing to grow up, he follows his dreams of being a noble knight, looking for his beloved Dulcinea and travelling the land doing good deeds in her honour.  He’s not afraid to stand up for what he sees as morally right, even if everyone around him sees the world differently.

This classic tale has had many event cinema versions already – one of our favourites coming from the Royal Shakespeare Company, and another releasing in cinemas soon from the Royal Ballet. Is there a better known story of forbidden love than that of Romeo and Juliet? Divided by the mutual hatred between their families, the young lovers rebel against their parents’ will and go to extraordinary lengths to be together. As we all know, they don’t exactly get a happy ending – but their actions have a huge impact on their families, who finally make peace in the end.

Can you think of other rebellious characters in event cinema? Let us know on our social channels!