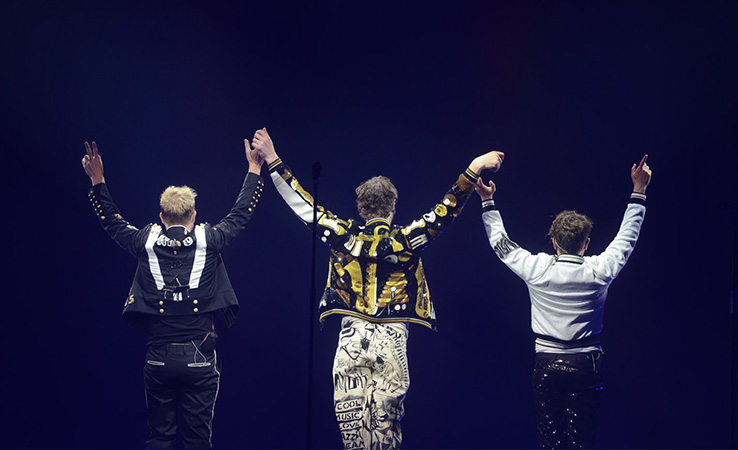 7 Reasons Why Take That Are The Epitome Of Squad Goals

There are many bands out there that simply work together like a well-oiled machine – but the lucky ones form bonds far stronger than that.

Here’s why we think Take That are one of the lucky ones – with a friendship that’s definitely going on our #SquadGoals list!

1. Their bond is stronger than ever

30 years of break ups, make ups, lots of rumours and drama – they’ve gone through it all, and yet they managed to work out their differences and create bonds that will last a lifetime. And not just between the remaining three – as Howard mentioned in an interview recently, they’ll always keep the doors open for Robbie and Jason, if they ever want to get the band back together again.

And both Robbie and Jason get a little nod during the Greatest Hits tour – how could they not?

2. They have the best banter

Watching these guys mess with each other in good spirit is always a joy. And it’s not just in clips like from the time that Mark fell asleep in an interview, the guys making fun of Howard forgetting the lyrics during Top of the Pops, or the band making fun of their lack of fame in the US by giving away CDs on the streets of Los Angeles with James Corden. But some of the best jokes come from the boys’ social media accounts – and the undisputed king of those is Howard.

His favourites usually include posting band photos with captions generally related to fart jokes – though recently he also excused the band’s lateness for stage by blaming Mark’s visit to the loo.

3. Their on-stage chemistry is amazing

It’s not just that Take That have a great connection with their fans, and know how to warm up a crowd – you see them interacting with each other on stage and you can’t help but feel they’re having the best time. You simply can’t fake that kind of positive energy.

4. They can’t make it through an interview together without laughing

There’s no doubt that our boys are professionals through and through – but fortunately for us, that doesn’t mean that they have to be serious all the time!  They love their banter, they love to make jokes, and in particular Jason and Mark have always been most likely to burst out laughing during an interview. There are clips on YouTube featuring compilations of Mark laughing – check them out whenever you need a little pick me up!

5. They support each other’s projects outside of Take That

Whether it’s pictures of Robbie reading Gary’s autobiography in the bath, the boys’ tweets urging fans to watch Howard’s new show Mission Ignition or Gary, Mark and Howard joining Robbie for a special X Factor performance – we can’t get enough of seeing how these guys all support each other, in and out of the band.

6. They have no regrets