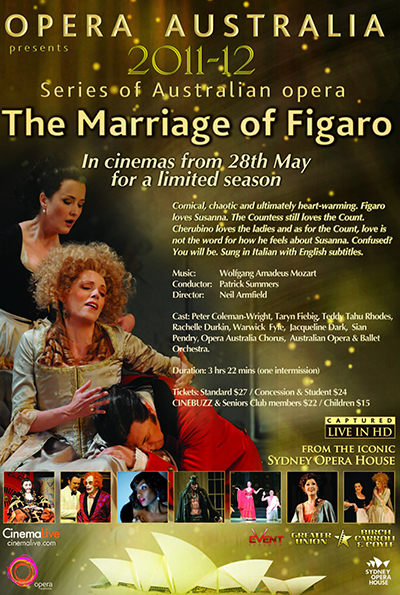 Opera Australia: The Marriage of Figaro

Charming, light-hearted and fizzing with subversive wit, Neil Armfield’s sparkling production of The Marriage of Figaro masterfully captures Mozart’s most popular comedic opera. In this classic performance, recorded live at the Sydney Opera House, Patrick Summers conducts an energetic fresh-voiced cast, headed up by baritone Teddy Tahu Rhodes and Taryn Fiebig who make a vivacious, appealing pairing as Figaro and Susanna, while Peter Coleman-Wright triumphs as the lascivious Count Almaviva.

Musically, this is the ultimate ensemble opera, with brilliant trios, quartets and even a fantastic sextet. Dramatically, it's the opera with everything: lovers and liaisons, disguises and tricks, lust and laughter.

In a not-so-subtle-dig to the aristocrats Mozart derided, the opera makes a hero of the underclass, especially the servant Susanna.

"Susanna is the servant with more brains than everyone else put together," says Taryn Fiebig about her favourite role. "She's the puppeteer, manipulating everything to get herself out of a bind. She manages to save her job, keep her husband, fix her boss's marriage, get Marcellina off her tail and still be a lovely person!"